Today, Apple officially released iOS 13 which includes an interesting new feature to combat unwanted robocalls. iPhone owners can opt in to the feature called “Silence Unknown Callers” that will send calls originating from phone numbers that are not recognized to voicemail without ringing the phone. That means if a phone number isn’t in contacts, emails, or text messages that have passed through the phone, the call will go straight to voicemail. If the caller leaves a voicemail, the owner of the phone can either listen to the voicemail or read a transcript of it to decide if they want to call back.

We commend Apple for joining the fight against unwanted communications and recognize this will certainly help reduce the annoyance that we all feel when we get a lot of illegal robocalls. The question is what unintended consequences will it have.

Research shows that fewer than 50% of the calls we each receive every month come from callers that are in our contacts list. Another survey several years ago showed that fewer than 18% of us actually listen to voicemail from phone numbers we don’t know.

What Calls Might Be Silenced With Apple’s New Robocall Feature?

If we as consumers decide to block all the calls that aren’t in our contacts list, what calls do we miss?

There are a number of efforts that have been launched to tackle this issue – from policy to technology to industry standards. But there are still limitations to what all of this can do to stop illegal and unwanted robocalls.

Not only are consumers at risk of not getting important calls they want, but the bad guys could get creative if they know specific numbers are more likely to get through. If they know that you are storing critical numbers – like the fraud line for your credit card – in your contacts list to make sure those calls get through, there is nothing in iOS 13 that prevents a bad guy from pretending to be a good guy.

We think we can do even more.

Twilio is currently piloting a program that we announced earlier this year to help consumers know not only who is calling them but with some context as to why. According to a Consumer Reports survey, 70% of users don’t answer a call if they do not recognize the number or if it comes from an anonymous number. Verified by Twilio will allow organizations to register a branded identity that will show up on the phone and that will allow each organization to dynamically outline why they are calling so consumers can make a more informed decision about whether or not to answer the phone. 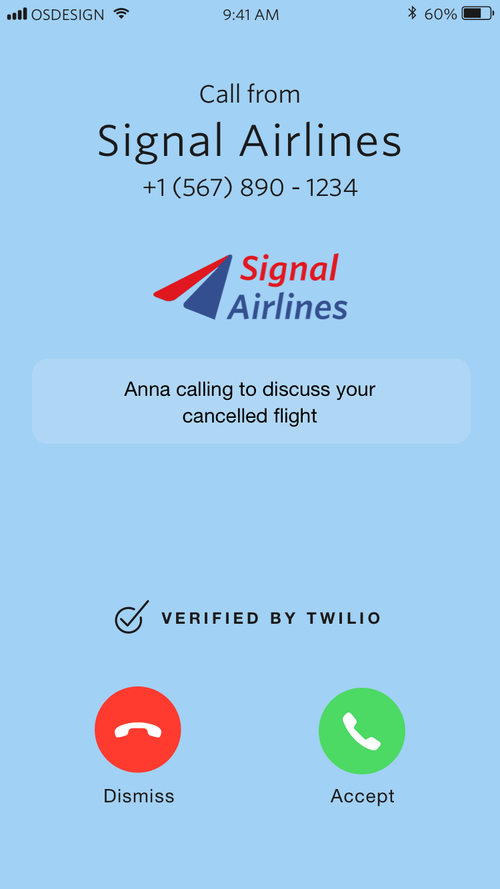 We are already working with leading call identification apps CallApp, Hiya, Robokiller, and YouMail and expect the service to be available early next year. We welcome the involvement of operating systems, carriers, and app developers to help us deliver the best experience for consumers.

Let’s make sure we are keeping the lines of communication open while we eliminate illegal robocalls.

Jeff Lawson is the Founder, Chairman and CEO of Twilio. He's focused on restoring trust in the communications we rely on everyday so that you can answer your phone again. He can be reached on Twitter at @jeffiel.