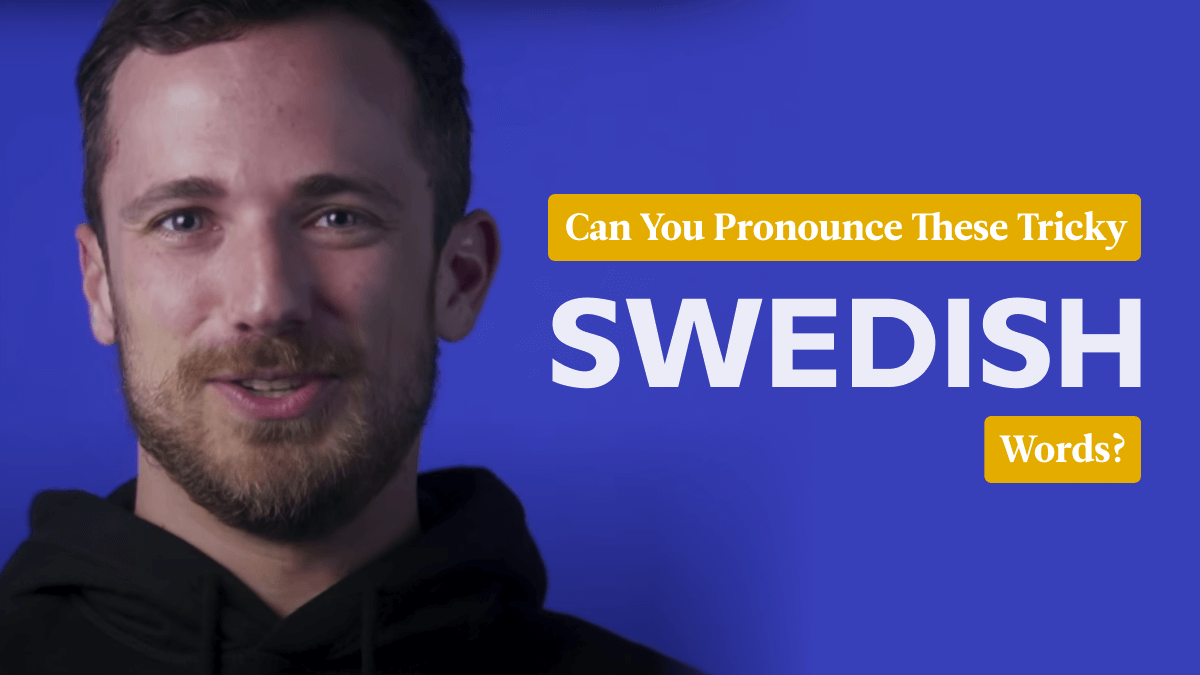 Supposedly, Swedish is relatively easy for English speakers to learn. But if everything’s relative, then it’s also possible that you’ll still find certain aspects of Swedish difficult to master — particularly when it comes to the most difficult Swedish words to pronounce.

The average American doesn’t get very much exposure to Swedish beyond the Ikea catalog. But if you’ve ever tried to sound out the product names, then you’re well aware that Swedish pronunciation can seem like a minefield of consonants and nuanced vowel sounds from the get-go.

For instance, what’s with the “sj” sound that’s all over the place? If you learned that this was called a voiceless fricative phoneme, that there’s no sound in English it really compares to, and that this same sound can be written as “sk,” “skj,” “stj,” “sch” and “ch,” would that clue you in at all?

Unfortunately, there’s no shortcut to mastering unfamiliar sounds like this — you’ll just have to listen to it a bunch and keep practicing. Here’s a tip to get you started on this sound, though: make a quick “h” sound in the back of your mouth and round your lips slightly while the air is coming out. Good job! Now say sjuttonhundrasjuttiosju (“1777”).

If you still need a few more examples to work through before you can just casually let that roll off your tongue, here are some difficult Swedish words and some advice on mastering the sounds within them. For extra help, click the play button to hear how they’re pronounced by a native speaker.

Difficult Swedish Words (And How To Pronounce Them)

Native English speakers will likely get tripped up on the rolling “r,” the “ö,” and the “g,” which is actually just that tricky “sj” sound in another disguise. Hint:  the “ö” sound is close to the “ear” in “earl.” And if you don’t get it right away, don’t feel bad — even adult Swedes mix up the consonant clusters in the middle and say “re-ssi-schör.”

This doesn’t look too bad, but spelling can be deceiving — especially in Swedish. One thing to be aware of is that when you see “r” and “s” together like this, it usually creates a “sh” sound in most Swedish dialects. So it’s basically “vah-sho-gou.”

This is a loan word from English (and French), but don’t fall into the trap of assuming it’s pronounced the same. The “g” in the beginning gets the “sj” treatment, so it sounds closer to “schung-uhr.”

It’s not always super obvious which syllable you should stress in Swedish. If you need to wing it, the first or second syllable is usually a good guess, but exceptions abound. In this example, you would say “tra-ka-se-RI-er.”

In this word, you’ve got to combine the “sh” and the “sj” sound. It sounds like “shu-go-shu” at first pass, but the sounds are slightly different. Listen closely!

The post 6 Swedish Words You’ll Struggle To Pronounce (If You’re Not Swedish) appeared first on Babbel.