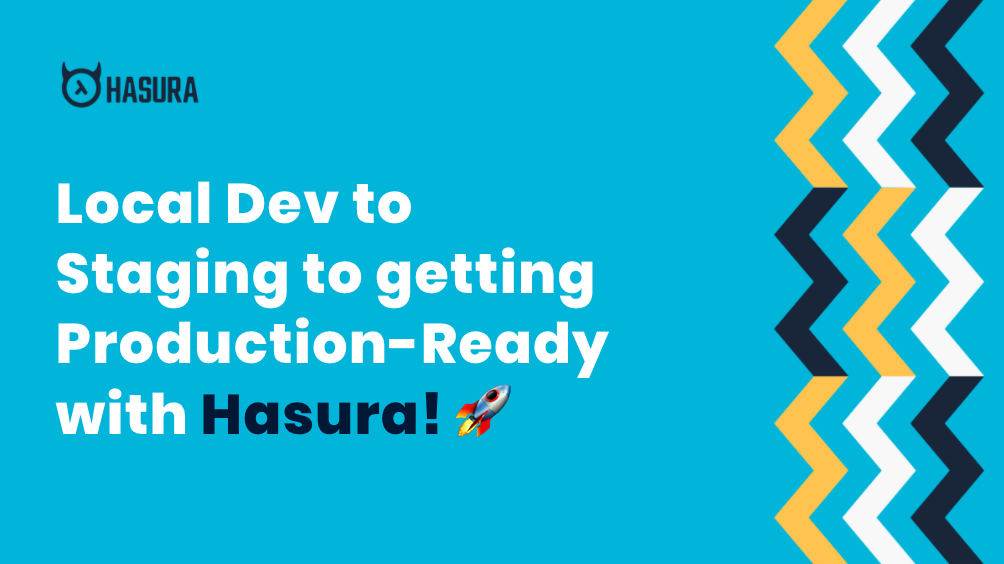 In this post, we will look at how to approach various stages of development with Hasura, from localhost to staging -> going live to production and finally performing maintenance updates.

Let’s begin with local development. We will look at different aspects of local development like running the server/database, managing migrations, testing out Actions and Events with Hasura.

The simplest setup to run Hasura locally is to use the docker-compose setup to run both graphql-engine and postgres as docker containers.

In case you have an existing Postgres setup running locally through a different environment, like the native Postgres Mac app or the Postgres binary installed on Linux, you can configure the HASURA_GRAPHQL_DATABASE_URL to point to the right postgres connection string and remove the Postgres container from the docker-compose setup.

Hasura needs the Postgres schema and the metadata to create the GraphQL API. We will see how to manage migrations for both.

The state of your PG database is managed via incremental SQL migration files. These migration files can be applied one after the other to achieve the final DB schema.

DB migration files can be generated incrementally and can by applied in parts to reach particular checkpoints. They can be used to roll-back the DB schema as well.

The state of Hasura metadata is managed via snapshots of the metadata. These snapshots can be applied as a whole to configure Hasura to a state represented in the snapshot.

Hasura metadata can be exported and imported as a whole.

Once you have the containers (graphql-engine/postgres) running, you have an option to manage the database schema migrations, depending on your current database state.

In case you missed doing the above, you can create a one-off migration file through CLI once the initial schema is ready.

For doing the above, you need the Hasura CLI installed. You can check out docs for installing the Hasura CLI. Once installed, initialise a hasura project with hasura init and this will scaffold a project directory with migrations, metadata and config.

New database: If your database is clean without any existing schema, you can start using the console via CLI ( hasura console ) , modify the postgres schema and the CLI will take care of creating the up and down migration files.

Existing database: In case you have an existing database schema, you can use the CLI to initialise the migration for that schema using the following command:

This will take a pg_dump of the public schema (can specify other schemas through flags) and create an up migration to get started. Additionally metadata will also be pulled from the server as part of this step.

Alternatively if you have an SQL file with all the DDL statements you can also specify that as an argument:

Once you set this up, you can continue to use Hasura Console served via CLI and make any schema changes and migration files will be automatically created as you work along.

During local dev, we typically modify schema iterating it over multiple times. This leads to a large number of migration files being created over time. If you are building a schema for a specific feature and you really don’t want to rollback or manage the smaller iterations in between, you can squash the migration files into a  single file for easier organisation.

Migrations are also versioned with timestamps. At any point of time, using the migrations, you should be able to (re)create the schema and apply metadata to replicate the project quickly.

Note: Using Hasura’s migration system is optional. In case you are comfortable or familiar using other database migration tooling, you can continue to use that to manage your database schema. To disable Hasura’s migration, you can do so via the Console served by the CLI. Head to to the Data -> Migrations tab and switch off the toggle  Allow Postgres schema changes via console.

Hasura stores some metadata to create the GraphQL API over Postgres and provide other functionalities like Remote Schemas, Events etc. All the actions performed on the console, like tracking tables/views/functions, creating relationships, configuring permissions, creating event triggers and remote schemas, etc. can be exported as a JSON/yaml metadata file.

You can use hasura metadata export anytime to export the current state of Hasura.

The metadata directory of your Hasura project should be put in your version control system like git, so that you can rollback corresponding changes later, if required.

Alright, so far we have taken care of managing migrations and metadata for our local dev. Now let’s move on to business logic.

How do I develop and test business logic?

Adding either a Remote Schema or Action will become part of Hasura’s metadata. It’s configuration after all. When you are adding either of them, you will have to give the HTTP handler / URL so that Hasura can communicate with that endpoint.

Assuming that handler is also running on your local machine, you will need to give an endpoint that is accessible from inside the docker container of Hasura.

Typically for Mac, this will be host.docker.internal and for linux where the containers are running in host mode, it will be localhost.

The recommended way to configure these handler URLs is via environment variables, irrespective of the environment (local/staging/prod).

Actions can have a base url through ENVs, something like  {{ ACTION_BASE_URL }}. So for example if all your REST API endpoints are running in a single server, you can configure the env with the host name.

where the {{ ACTION_BASE_URL }} will typically have values like http://myserver.com or when running in localhost, it will look something like http://localhost:3000. All of this will be passed to the graphql-engine server as ENVs.

Forwarding Headers can be configured using ENV. This will be applicable when you are sharing a common secret between your Action handler or passing in some Authorization tokens etc.

The GraphQL server URL can come from an env var. Similarly any additional headers can be configured that can have values from env.

Similarly while creating Events, you can specify the URL for event handler via Env.

During local dev, you may want to look at errors in detail so that you can fix the underlying issue. For a GraphQL request that results in an error, Hasura may provide additional information for each object in the extensions key of errors. The internal key contains error information including the generated SQL statement and exception information from Postgres. This can be highly useful, especially in the case of debugging errors in action requests.

Once you are done with local dev, moving to a different environment (staging/production) will primarily revolve around

Generally, when you are done developing your app locally, you would push it to your upstream version control system like Github or Gitlab. You can trigger CI/CD workflows when a push is made to your upstream repository. When you want to deploy your changes to staging, you may push your latest code to a special branch or push a new tag which updates your staging environment.

The process for CI/CD with Hasura instances is essentially a mirror of the manual local workflow you would use. The CI/CD instance should download or be given the CLI as an artifact, and then run the series of commands you’d like to integrate. This generally means “hasura migrate apply” and “hasura metadata apply”, and could also mean “hasura pro regression-tests run”.

To do this, you would download the CLI either through wget/curl, or if in a Dockerfile and okay with using a static version number, use “COPY –from” to extract the binary from hasura/graphql-engine:vX.X-cli-migrations.

Then run the migrate/metadata/regression tests commands, passing in the endpoint and admin secret for the remote.

Migrations can be manually applied to any Hasura instance through:

This will apply only migrations which have not been already applied to the instance.

Metadata can be manually applied via:

Note: If you are self-hosting Hasura and have a CI/CD setup, you can also auto-apply migrations/metadata when the graphql-engine server starts.

A good development workflow would require that tests be run 1) early in the dev process, and 2) automatically with changes, to ensure changes to the schema don’t break functionality.

As you keep making schema changes, running regression tests on Hasura Cloud will ensure you are not making unwanted breaking changes.

Hasura Cloud is the recommended hosting solution for Hasura as it takes care of Infrastructure management automatically (like auto-scaling), apart from providing analytics/rate limiting and other advanced features.

Like staging, the migrations/metadata workflow needs to be repeated. The docs cover a Production Checklist for going live.. But broadly they are

After going live, you can continue to use the same migrations/metadata workflow via CLI as part of incremental app building.

This depends on where your Hasura container is hosted. But broadly what we need to update is the docker image hasura/graphql-engine:<version> where the <version> will be replaced with the latest version. (v1.3.1 for example).

There are update guides for popular vendors and tools like Heroku / Docker / Kubernetes / DigitalOcean.

What’s your workflow for managing local dev, staging and production with Hasura look like? Do share in the comments 🙂