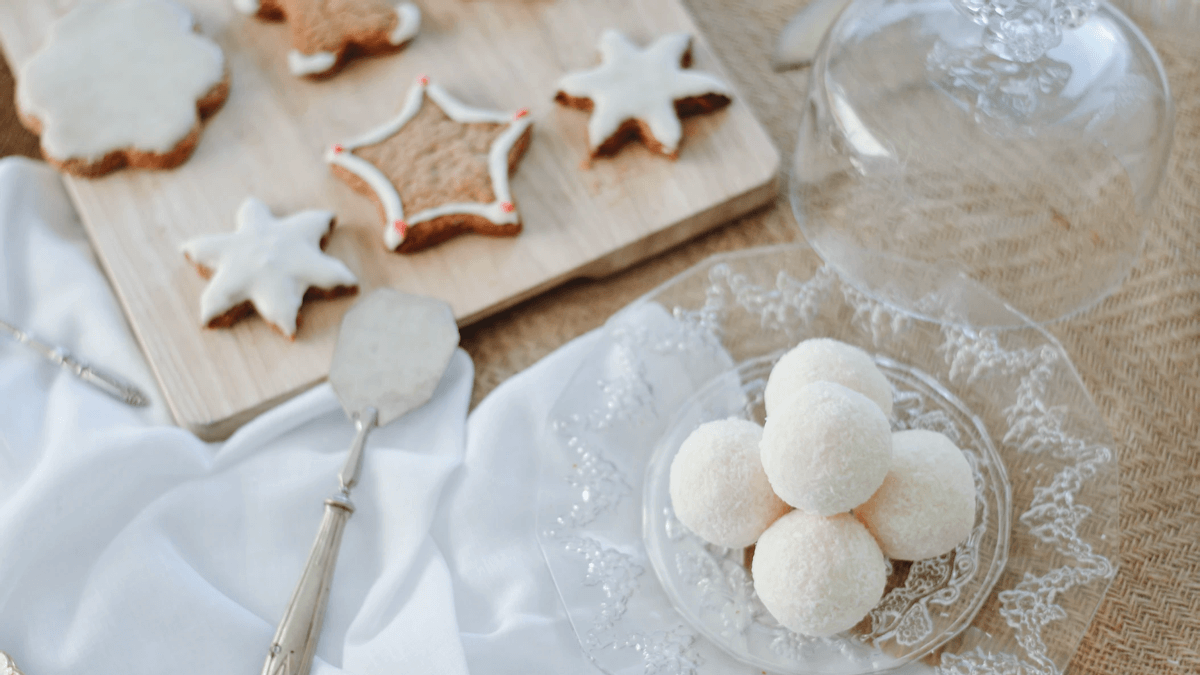 There’s something about the holidays that make cookies an inevitability. As the temperatures dip down, baking cookies is an excuse to turn on the oven and fill the kitchen with both warmth and the smells of vanilla and cinnamon. Cookies are a great way to feed gatherings of people, without the need for cutting or slicing. And as the evenings get darker and we start to stay inside more, they’re a welcome escape. Traditional Christmas cookies are nostalgia wrapped in sugar.

Another great thing about cookies is how varied they can be. It’s tempting to always stick with the same pastries your parents made, but that limits your possibilities. To help you diversify, we looked at some of the most popular cookies in other countries. Presenting the 12 Days of Cookiemas, with recipes for traditional Christmas cookies from around the world.

Pfeffernusse are very popular throughout Germany and the Netherlands during the holiday season. The name literally means “pepper nuts,” which sounds far less appealing than they actually are. They’re similar to gingerbread, but thicker, softer and covered with a firm sugar icing. The snowball appearance gives them an extra wintery look. You can buy them in many stores in the United States, but nothing beats the homemade kind.

Alfajores are kind of like Oreos, but also they’re nothing like Oreos. These pastries are two soft cookies held together by dulce de leche, and the combination is delicious. The origins of this cookie apparently go back to Spain over 1,000 years ago, when a slightly more rudimentary form of the pastry was made. The recipe traveled to South America during the colonial era, and they were really perfected in Argentina.

Perhaps the greatest feature of kołaczki is that they’re very versatile. The exterior is constant — a cream cheese dough with a nice flakiness — but the inside can be whatever you’d like. Whether filled with almond spread, strawberry or even Nutella, kołaczki are a delicious cookie. Poland, the Czech Republic and other countries all claim to have invented this pastry, but its exact origin is lost to history. You don’t need to know where they’re from to eat them, though.

Don’t worry, there’s no actual glass in stained glass cookies. It’s essentially a sugar cookie with holes cut into it, where you add crushed candy that’s heated to turns into a “pane.” So it’s literally a candy window. These cookies are great to eat, but they’re also used for another purpose: decoration. You can put a hole near the top and put string through them. Some people hang them on their Christmas trees or in their windows. Of course, you can also just eat them, because some people might think it’s weird to have stale cookies hanging around your house.

Rugelach, traditionally a Jewish pastry, is not explicitly associated with any holiday. Yet it seems that as December rolls around, these cookies start to appear. They often makes an appearance at holiday parties, regardless of the host’s religious affiliation. They’re kind of like mini croissants, with dough wrapped around jam, cinnamon, chocolate and nuts. The filling is variable, but the enjoyment is not.

Vanillekipferl are almond-flavored pastry crescents. Their origin is a bit muddled, but they’re popular in Austria, Hungary, Germany, the Czech Republic, Slovakia and Poland. It’s believed that the cookie’s crescent shape is based on the Turkish crescent moon that you can see on Turkey’s flag. They were made like this to celebrate the Hungarian defeat of the Turkish in one of several battles in the Ottoman-Hungarian Wars. This is clearly not the most holiday-friendly story, but hey, they’re cookies. Vanillekipferl are eaten year-round in Austria, but they’re considered a holiday treat in most other countries.

Yes, we chose two cookies from Germany, but these are worth it. After all, Germany is famous for traditional Christmases, so it only makes sense they would have the plentiful traditional Christmas cookies. Often called cinnamon stars, these cookies are made from almonds and cinnamon. In the old days of Germany, cinnamon was a rare spice, and so these cookies were considered a specialty item. They became associated with Christmas because it was the time of year when people splurged on the finer things. They’re always shaped like six-pointed stars, so let them light up your dark night.

Italy has no shortage of small cookies for the holiday season, but anginetti are a particular favorite. They’re pretty typical drop cookies with a slight lemony taste, but there’s something irresistible about the glaze with the sprinkles. The sprinkles also give them a very festive look that make them a colorful part of any cookie plate. They’re also a lot less heavy than your average cookie, so you can eat more without feeling guilty.

This is a treat of many names. Joulutorttu literally translates to “Christmas tart,” but they’re more commonly known in English as prune tarts. Don’t let that name scare you away. Prunes are not always bad, and these cookies prove it. They cookies are also called pinwheels, thanks to their whimsical appearance that is formed by folding the dough in a certain way. They’re particularly enjoyable when paired with a cup of coffee.

Shortbread seems are a pretty lackluster cookie when judged on looks alone, but it’s hard to beat the buttery, crumbly flavor. These cookies are great whether you make them yourself or buy them in a tartan tin. Shortbread also has history: they’ve been around since medieval times in Scotland. Their popularity is sometimes credited to Mary, Queen of Scots, who apparently enjoyed them during her reign in the 16th century. This story, while fun, is probably false. These traditional Christmas cookies predate Queen Mary’s reign.

Are those wedding bells I hear? Why no, it’s just biscochitos. These are usually called “Mexican wedding cookies” outside Mexico, and they are indeed heavily associated with matrimony. That doesn’t mean you can’t have them whenever, though, and they are a nice treat in cold weather. These tend to be very simple to make. Biscochitos are flour, nuts and a few other ingredients are baked together and then rolled in powdered sugar.

The French consider madeleines to be a small cake, but we’ll call them Christmas cookies for simplicity’s sake. These spongy pastries are not for the novice cook, as the recipe is a little complex. Fortunately, you can also buy them at any French bakery. Madeleines can be made in a few different flavors, like chocolate and lavender, but lemon ones are the most common. Madeleines are some of the prettiest cookies in existence, so they’ll work very well for your Instagram. They’re best paired with a cup of tea and a novel (maybe even French novelist Marcel Proust’s In Search of Lost Time, where madeleines play a central role).

The post The 12 Days Of Cookiemas: Holiday Pastries From Around The World appeared first on Babbel.