But which one is at the top right now? We’ll check it using data from business analyses, Google Trends, and the search volume per country.

The main players in the cloud services industry are Google, Amazon and Microsoft. Amazon’s AWS is, by far the most popular with about 31% market share of cloud services. Above all, this means that, in the IaaS (Infrastructure as a Service) segment, AWS gets as much as 50% of revenue. Microsoft Azure is second with 20% and Google Cloud Platform takes the third place with 6%. Bringing up the rear is Alibaba with another 6%. The market is quite unstable though, with relatively a lot of fluctuations. As one of the most dynamic industries, cloud services grow by about 30% each year. 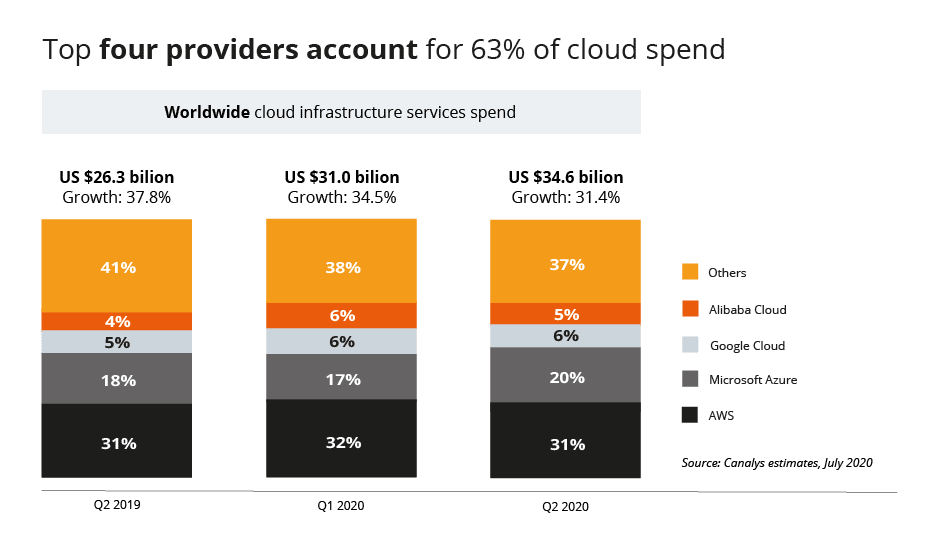 The domination of the American giant AWS is explained by Jeff Bezos. Essentially, it results from the headstart Amazon got compared to the competitors:

AWS had the unusual adventage of a seven-year head start before facing like-minded competition. As a result, the AWS services are by far the most evolved and most functionality-rich.
Jeff Bezos

While AWS is definitely the largest player on the market at this point in time, you can clearly see that Microsoft Azure and the smaller ones represented by Google and Alibaba are growing relatively rapidly. It’s especially observable when looking at data from the last few years:

The relatively high interest in the lesser known Alibaba Cloud is mostly the result of its strong position in China.

The Google Trends Map illustrates the popularity of each query by highlighting particular regions. The darker colours indicated the places where there’s a higher possibility of somebody searching for the specific phrases. The distribution is especially visible when it’s presented this way: 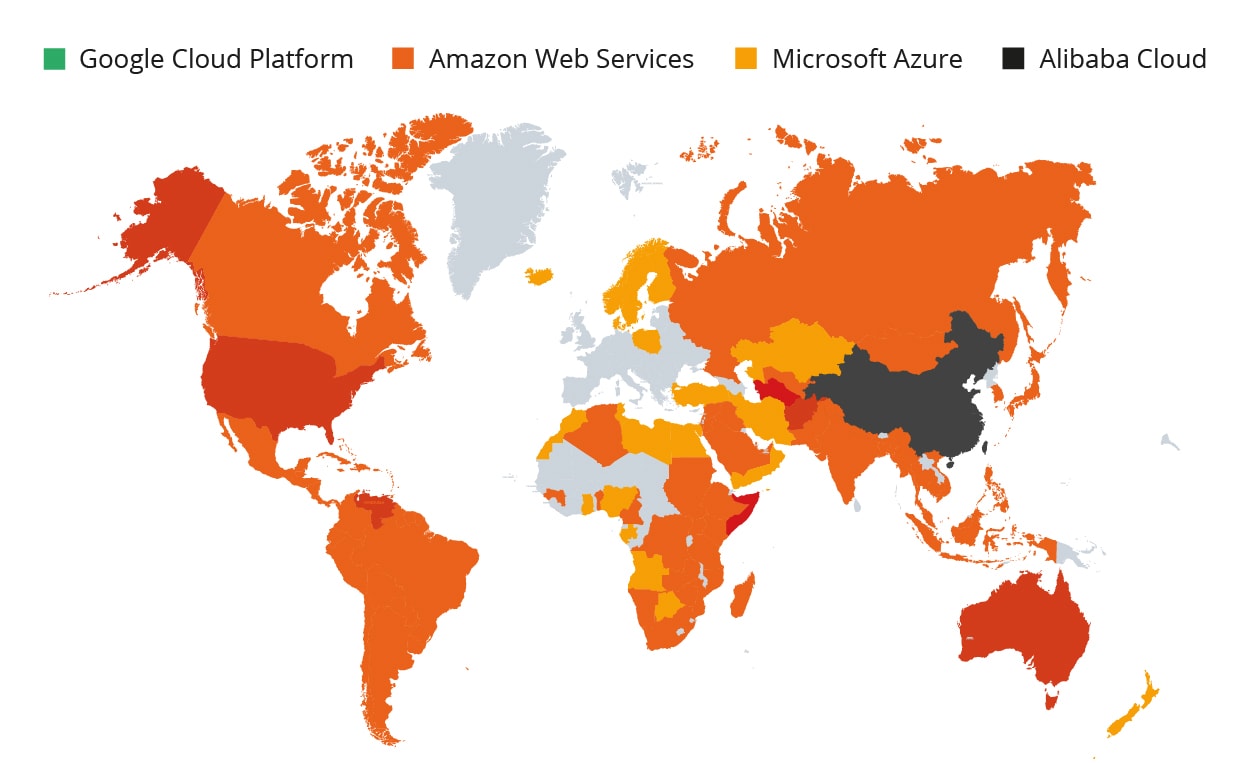 The AWS solution has dominated the US, South America, most of Europe, India and plenty of other smaller regions.

Microsoft Azure is quite prominent in Northern Europe in the Scandinavian region, as well as Poland, Switzerland, Netherlands and Portugal.

As for Alibaba, it’s definitely the most popular in China where it has more than 40% of the market share.

Google Cloud Platform is not the most popular in any part of the world, hence we can make an assumption that it’s more or less equally popular in each region.

When looking at the UK, the USA, and Germany we can draw conclusions from the analysis of the most popular phrases associated with each cloud service. Note that Google Cloud can have a different search intent, as one might think of the Google Drive, which has nothing to do with the Google Cloud Platform. This type of analysis is certainly not perfect, as each user searches for the providers a bit differently but it does provide an image of how things are search-wise.

The reports conclude that AWS is by far the most popular service and the search volumes for each phrase are further evidence of its domination. Of course, the USA is the leader by quite a large margin, but note that it’s 2,5 times more popular in the UK than in Germany.

Looking at the Microsoft Azure search volumes, it strikes you instantly how much less popular it is. The main points of interest here are the alike distribution for each country, and a similar CPC compared to AWS.

In the case of Google it’s more relevant to focus on the exact or almost exact keywords such as google cloud computing or google cloud services. Other ones may as well be associated with different services provided by Google such as the Drive or Print. Note that google cloud console can be mistaken for google search console due to the similarity of the phrases. The latter has nothing to do with the cloud environment.

The primary thing to observe here is the lowest average CPC compared to AWS and Azure.

Looking at the Alibaba report further suggests that it has marginal popularity in Europe and the US.

Going by this comparison, you can clearly see that each of the four solutions is more popular in the UK than in Germany, with more than twenty million people fewer living in the UK.

Because Alibaba has such a negligible presence in Europe and the US, we’re going to focus on the most prominent providers of cloud services.

Amazon is, by far, the leader here. Many years of market domination allowed AWS to develop freely and, in turn, provide the most features out of the three. Apart from the variety of operations AWS provides, there’s also their vast array of data centers all over the world.

Having such a well-connected network allows AWS to deliver the data extremely quickly and without disruptions. The service is divided into Availability Zones, Edge Locations and Regions. There are 14 AZ’s, 114 Edge Locations and 22 Regions. The Availability Zones are situated far away from one another so that they encompass as much space as possible. If one of them goes down for some reason, the Edge Locations act as caches close to the location of customers. This allows for quick response time and little to no downtime.

It’s tough to name all of the services provided by AWS. In fact, there are more than 18,000 of them, and this number keeps growing.

The main services AWS provides include:

While GCP and Microsoft Azure share most of the features with AWS, AWS’s variety definitely wins here. There’s far more possibilities with Amazon and the scope of operations is massively larger. For example, no other cloud service provider has automated management, robotics development, desktop application streaming and a large data transfer solution in exabyte scale.

It’s not perfect, though. The way of how the costs work is not entirely clear and can be confusing. Especially for enterprises using lots of AWS’s services it’s hard to manage the costs as well as to understand them thoroughly.

Being a relatively new player in the cloud service industry, Google does have some tricks up its sleeve. The primary specialisations of GCP include Big Data and Machine Learning. As for their infrastructure, Google also has a large potential with their worldwide network of data centers. In fact, Google has quite a bit more than AWS with 24 Regions, 73 Zones and 144 Edge Locations. The availability of their services is impressive as well, boasting more than 200 countries.

Of course, Google shares most of the services that AWS has to offer, although with less variety. Being the third in the market, it doesn’t yet have the recognition to gather those high-level enterprise companies.

GCP often becomes the go-to provider for customers that directly compete with Amazon. Because of their quick growth and the abundance of data centers, Google is a considerable player that has the potential to outperform the competition.

Azure, similarly to Google, had quite a late entry to the cloud service business. They’ve quickly grown due to the abundance of Windows, basing all of their features on already finished software. Azure has 58 regions worldwide, with more than 100 data centers and is available in 140 countries.

The main reason for Azure’s success is definitely the popularity of Windows. Enterprises know the product, they’re familiar with the software and know the possibilities. For this reason, the management of Azure becomes easier. So many companies run on Microsoft’s software, that it’s more convenient for them to stick to one solution. You can also count on some great discounts if you’re a user of Windows’ other products.

The primary pain point of Azure is that it doesn’t feel like it can perform well with enterprise-level businesses. Some reported difficulties include problems with support, documentation, and instructions.

Why is Azure the main contender for AWS?

Launching four years later than AWS, Azure did have quite the distance to cover. The main advantage of Azure over the competition is the fact that Microsoft has plenty of other software to offer. No other provider can say that about themselves. There’s no software Amazon or Google has built that runs on Azure.

When Satya Nadella became the third boss of Microsoft, he decided to flip the company on its head. Windows stopped being the main selling point of the company. Instead, he chose to put Azure on the pedestal. With the growth of Facebook and Google, Microsoft was deemed to lose its position by some, as the price of actions was at a standstill and they were stagnating. By focusing on Azure’s growth, Nadella managed to double the revenue and achieve a market capitalisation of $1.6 trillion. Other companies such as IBM and Oracle tried to follow in Microsoft’s footsteps, though unsuccessfully.

Azure’s shares had been steadily growing during the past few years. With the constantly evolving market of cloud environment, the abundance of Windows and Microsoft’s focus on their cloud platform, one can make an assumption that Azure may well overtake AWS.

The same conclusions can be drawn when looking at the past. Microsoft’s office software definitely wasn’t the first to appear. Excel wasn’t the first spreadsheet and Word wasn’t the first text editor. Nevertheless, Microsoft was so good at commercialising their products that Office soon became the most popular software. In fact, according to Gartner, Microsoft controls more than 87% of the market of Office-like software. Google is second with just over 11,5%.

Microsoft has the advantage of possible discounts, too. By bundling Azure with Windows and other software, they can reach way more customers. In fact, Windows operating systems are used by nearly 4 in 5 computers and comprise 72% of the servers. Because it’s so common, it becomes a huge advantage. AWS doesn’t have that, and neither does Google.

Azure is certainly not perfect, as their infrastructure is unstable at times due to the data centers being spread over a wider area, but more thinly than AWS’s. This can lead to disruptions of service, where uptime is essential. Perhaps, with cloud being Microsoft’s focal point, we’re going to see improvements in that area. We know that Microsoft’s aim is to either match or even overtake AWS in the cloud service market.

While AWS is surely the market leader here, the industry is growing so quickly that we may see it changes. For enterprise-level companies the variety of features AWS has to offer is undoubtedly the primary selling point. Furthermore, Amazon’s scale of operations allows them to be fairly aggressive with their price strategy.

It is visible that during the past few years GCP and Azure both have gained a considerable amount of market share. Azure stands out with the popularity in European countries in some being more popular than AWS. On the other side of the world there’s Alibaba, whose presence beyond China is insignificant.

Cloud solutions are the fastest-growing sector of the IT market. Annual growth of 30% results makes the expected value of the cloud market $500bn by 2023. The pandemic situation only allowed cloud services to develop more rapidly, as the demand increased.

Do you want to know more about Cloud and how can your business benefit from it or are do you want to impove your existing system? Contact us or check our services: