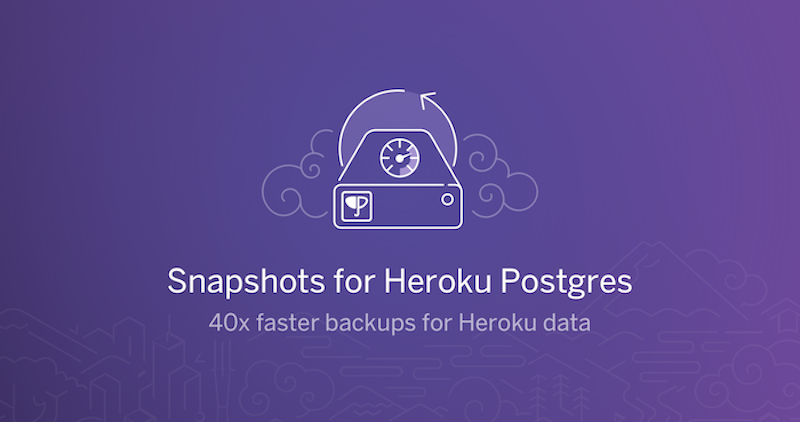 Today, we’re thrilled to announce backups of Heroku Postgres are now 40x faster by leveraging Snapshots in place of base backups. We’ve been hard at work focused on improving performance, speed, and capacity for the Heroku Data services you rely on. In the past forks and follows of a Premium-8 test database with 992 GB of data took 22 hours; now with Snapshots, the same process is reduced to 10 minutes. This makes the creation of forks and followers, and restoring the database, faster than ever, at no additional charge.

In November 2020 we introduced a performance improvement to our physical backup and restore functionality for our Heroku Postgres customers. We now take snapshots in place of base backups. When we restore, we restore instances using the last snapshot taken. WAL replay from that point is still as before (using WAL-E).

Snapshots are faster than base backups, occur at the storage level, and are incremental so we can take them more frequently.

Overall, this means restoring a database is much faster now. Now with Snapshots, the rate at which we capture is dynamic. For average or low change databases we try to capture at least every 24 hours. For databases that change more frequently, however, we capture more frequently. Restoring to a snapshot that is closest to the transaction we want to restore to means less WAL replay, and a lower mean-time-to-restore.

The Old Way: Backups Was Not Built for Speed

In the past backups of Heroku Postgres relied on a WAL-E for primary backup and restoration. WAL-E is a convenience wrapper for the two conceptual parts required for disaster recovery in a PostgreSQL world:

To replay or restore a PostgreSQL service, we used to restore from a base backup first, then replay the WAL previously archived until the closest possible restore point is achieved. The combined processes of base backups and WAL record changes means it can take a long time to upload when new backups are made, and a long time to restore, which includes downloading the base backup from servers and replaying WAL record changes between base backups. You can read more about this backup and restore methodology in our Dev Center article on Heroku Postgres Data Safety and Continuous Protection. But clearly, this process was not built for speed, so we made it better!

Snapshots are one of many improvements we’re making to improve your experience with Heroku Data Services. We’d love to hear from you on how this enhancement improves your workflow.