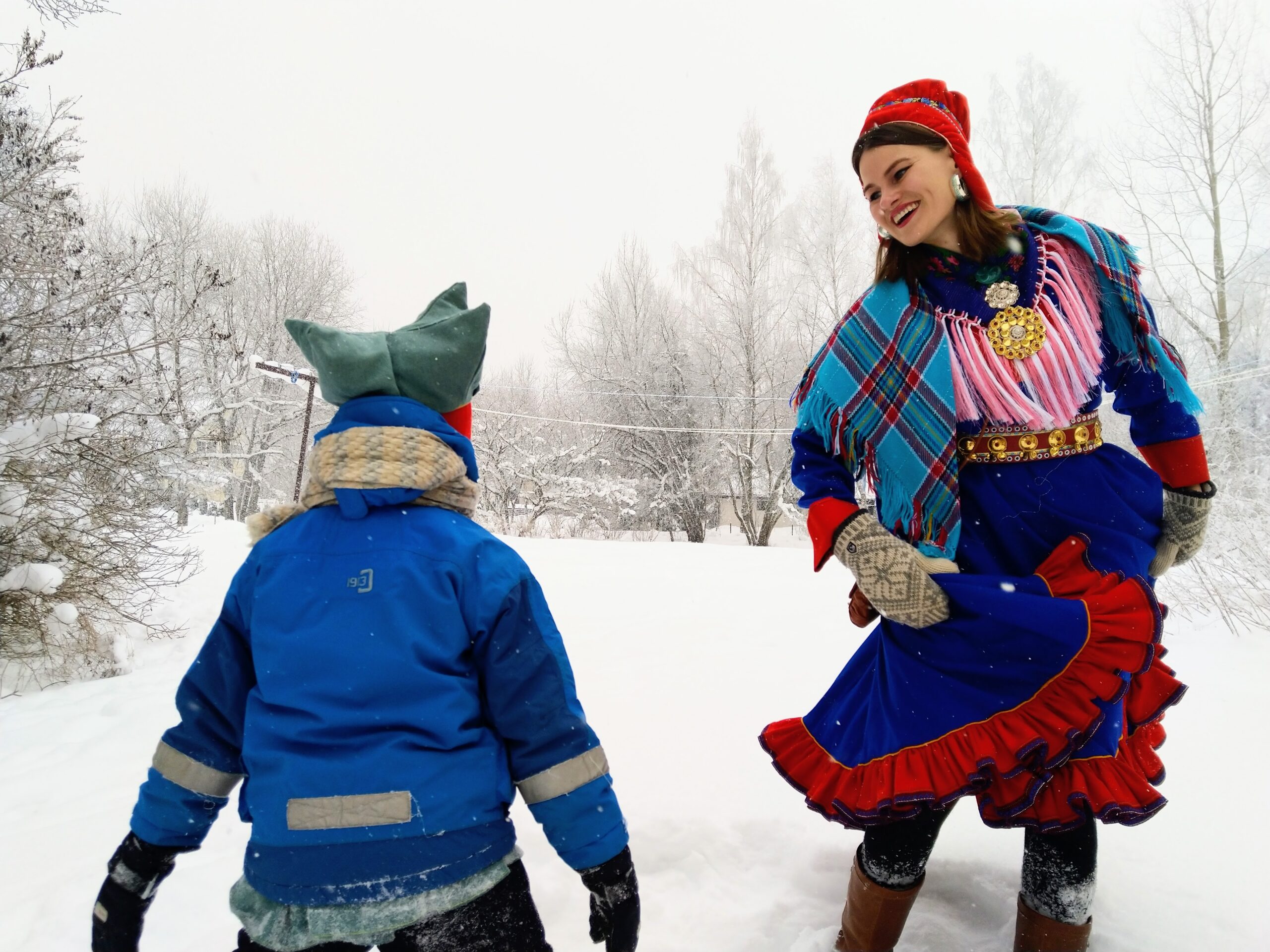 On February 21, Mother Language Day promotes linguistic diversity and action against language discrimination. During the Covid-19 pandemic, language equality has become more important than ever.

Helga West calls the Northern Sámi language her “superpower”. As an indigenous Sámi blogger, poet, and reconciliation researcher, it was always her dream to pass down the language to her son.

The Sámi culture has been threatened over centuries due to assimilation policies such as former bans on Sámi languages in schools and public spaces. As a result, only about half of the total Sámi population of around 80,000 people, traditionally inhabiting northern Finland, Sweden, Norway and Russia, speak a Sámi language as a mother tongue.

“Hearing [Northern Sámi] helps when I miss home,” says West, who grew up in the northern Finnish village of Savvon in Sápmi (the area comprising the Sámi ancestral homeland), but now lives in Estonia. “It’s a happiness that feels very physical and empowering. I can feel the language under my skin.”

So when after moving to Estonia in 2019, her son, then a toddler, refused to speak Northern Sámi, West describes feeling distraught.

“I was telling him if we don’t speak Sámi, our language will die,” she says. “I realized I was pushing my ethno-stress onto him. Every day I’m thinking about my Sámi kid and how he would learn to speak and write Northern Sámi [if he were] here in Finnish Sápmi. The struggle is real.”

Language is a human right

Northern Sámi is one of 60 regional, minority and endangered languages across 18 countries which the European Language Equality Network (ELEN) fights to protect from discrimination. While such languages, encompassed under the inclusive umbrella term of “lesser-used languages,” are not spoken by majorities, they are still represented by about 55 million people, or 10 percent of Europeans.

These languages, like Welsh, Gaelic, Catalan, and Basque stand the risk of falling out of use, due to declining numbers of speakers and the dominance of majority languages like English and Spanish, among other reasons.

While the European Charter for Regional or Minority Languages recognizes the use of such languages publicly and privately as a basic right, many European states still continue to undermine their own linguistic diversity, says ELEN’s Secretary-General Dr. Davyth Hicks. He points to problems using co-official languages in Spain’s judiciary system and discriminatory policies in France against the official use of regional languages such as Breton and Corsican.

Indeed, the general condescension against minority languages and accents is prevalent in public life. Last fall, one French politician, Jean-Luc Mélenchon, drew widespread ire for his discriminatory outburst at a reporter hailing from Toulouse who spoke with a strong southern accent.

“If we don’t revitalise and regenerate these languages, these cultures, they disappear,” says Hicks, who himself speaks Cornish with his children. “We will lose a unique worldview and perception of the world. Furthermore, with the loss of language, a people are forced into this netherworld of neither being fully part of their indigenous culture nor part of the majority culture. The loss of language and culture is traumatic for a people. Language recovery helps to deal with that trauma.”

According to Hicks, the state of language inequality in Europe and across the world poses detrimental harm to linguistic minorities. Particularly during the Covid-19 pandemic, when basic health information has not been steadfastly available in regional tongues – making this year’s observance of Mother Language Day (February 21), promoting linguistic diversity, extremely important.

A survey of ELEN’s members found that most European speakers of minority languages had not received basic health information about Covid-19, let alone medical treatment, in their own language.

He uses the example of Romania’s Transylvania where in many areas Hungarian is the majority language yet information about the Covid-19 vaccine has not been made available in Hungarian. “Many elderly Hungarians don’t speak or read Romanian well at all,” he says. “Excluding them from health information and medical care in their language is unacceptable for a modern European state in the 21st century.”

Bridging the gap between generations

Language recovery and promoting language equality can have a powerful impact on healing the intergenerational hurt and oppression experienced by minorities.

“People in Europe tend to miss out on how good language can be for wellbeing and spirituality,” explains Hicks, emphasizing research on the importance of language in improving health outcomes for indigenous populations globally. “Language recovery can help people that have been through collective trauma, like famine, losing land and autonomy, or simply not fitting in.

“It’s not that we are revitalizing the language, it revitalizes us.”

According to Helga West, a fundamental part of her quest to preserve Northern Sámi is informed by the discrimination her father experienced while attending a boarding school where he was not allowed to speak his language.

“It’s a deep gap between my generation and my father’s,” says the poet and blogger. “For those older generations, it means so much for them to hear our mother tongue since they had to hide it when they were younger.”

Similarly, Dublin-born writer Darach Ó Séaghdha turned to the Irish language to connect with his elderly father who was formerly a linguist and school inspector. “It was something for us to talk about,” he says. “He refused to have [the language] taken away from him, growing up in the ’40s and ’50s where having opportunities meant being prepared to leave [Ireland] and give up our language and culture.”

In 2015, Ó Séaghdha started the popular Twitter account @theirishfor which shares the quirks and deeper meanings behind Irish words, grammar and phrases.  The account now has 50,000 followers and has spawned two books (Motherfoclóir: Dispatches from a Not So Dead Language and Craic Baby: Dispatches from a Rising Language) and a podcast, also titled “Motherfoclóir” (which sounds like an expletive, but actually means “dictionary” in Irish).

Ó Séaghdha’s weekly guests are on the forefront of Irish language activism, and include the likes of an expert on learning Irish with dyslexia or an Irishman fighting in Belgian court to have a fada accent mark in his daughter’s name. Ó Séaghdha calls it a nerdy, escapist podcast which proves that lesser-used languages can also be topics of general interest, teaching us not just about specific cultures but humanity itself.

“Folklore can be a keyhole through which to look at Ireland but also the entire world,” he explains.

Language recovery is an uphill struggle

Helga West’s son, now six years old, finally speaks with her in Northern Sámi. While her home is sometimes a “linguistic mess” (she and her husband communicate with him in Northern Sámi and Estonian respectively, while the couple speaks to each other in English), she says she couldn’t be happier.

Meanwhile, she has also vowed to take a new, more affirmative approach to upholding Sámi languages, refusing to let this facet of Sámi culture become othered and exoticized by the idea that it could be in danger.

“When my son replied to me, ‘If [Northern Sámi] is a dying language, why should I bother to learn it?’ it showed me that my attitude was wrong,” West says. “Northern Sámi is, in fact, a living language, spoken by regular people like myself and my family at home. And as long as it’s being spoken, it can never be dying.”