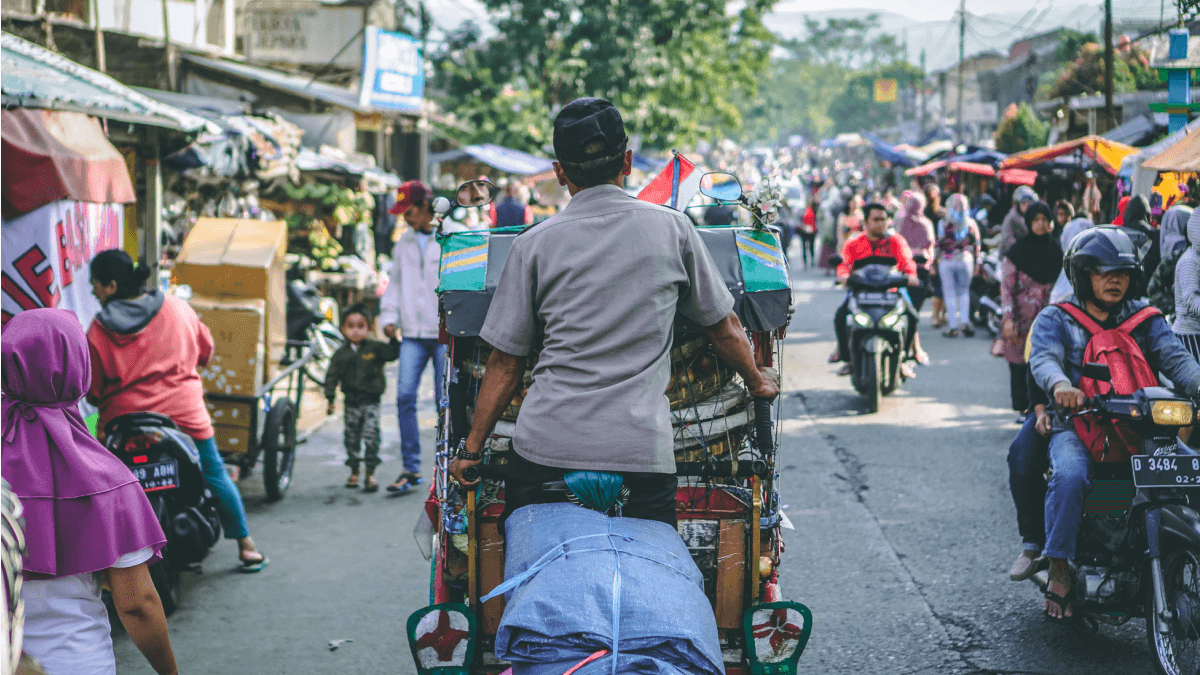 If you count both native and non-native speakers, the Indonesian language is one of the most-spoken languages in the world. And yet, almost every single one of those speakers comes from a single country: Indonesia. The language has a fascinating history, involving colonization, nationalism and an attempt to unify the culture of a nation that is incredibly diverse.

A Brief History of Indonesian

Indonesian is a member of the Austronesian language family, along with Tagalog, Māori, Samoan and many others. Indonesian itself is a standardized version of Malay, which encompasses a range of languages and dialects that exist throughout Southeast Asia.

Old Malay was the lingua franca among traders in the Indonesian archipelago, with its earliest recorded uses can being traced to the seventh century CE. When Dutch colonists started conquering the archipelago in the 17th century, they used Malay to communicate with the native population. This is unlike the majority of colonizers, who imposed their language on indigenous people, like the Spanish and British in the Americas.

During the nationalist movement of the early 20th century, which followed centuries of oppression by the Dutch, Indonesian was formalized as the official language by the Second Youth Congress as a way of rebelling against the colonizers. The Dutch attempted to force people to learn their language as a way of maintaining control, but when the Japanese conquered Indonesia in 1942, Dutch was outlawed. Indonesia gained its independence in 1945 in the aftermath of World War II, and the Indonesian language became a unifying force for the country.

There is only one country where Indonesian is the national language, and that is (you guessed it) Indonesia. In addition to that, Indonesian is one of the languages of the Association of Southeast Asian Nations, which is a group of ten countries that cooperate on various economic and cultural goals.

Indonesian has also acted as a working language in East Timor, which was occupied by Indonesia from 1975 to 1999. Since the country’s independence though, Indonesian has fallen out of use and a different colonial language, Portuguese, is now more commonly used than Indonesian.

How Many People Speak Indonesian In Indonesia?

It’s estimated that about 198 million people in Indonesia speak Indonesian. Less than a quarter of that total, however, speaks Indonesian natively: roughly 42 million. That number is growing, though, as efforts to spread the language are expanded, as we’ll discuss more further down.

How Many People Speak Indonesian Everywhere Else?

There is no country except Indonesia in which Indonesian is spoken by at least 1 percent of the population. The countries with the highest population of Indonesian speakers are Taiwan (239,000), Hong Kong (190,000), Singapore (118,000) and — because of the colonial ties — the Netherlands (118,000).

Indonesian is also one of three Asian languages taught in Australia as part of their Languages Other Than English program. It has been taught there since the 1950s, but otherwise is not widely spoken in the country. Efforts to teach it have been in decline in recent years, though Australia recognizes their cultural history is inextricably tied together with Indonesia. With those efforts, about 67,900 people in Australia speak Indonesian.

Beyond those countries, there are a few more with sizable Indonesian-speaking populations. The United States has 67,400, Saudi Arabia has 99,000 and Germany has 18,600. You can also find a few thousand speakers in Kuwait, New Zealand, the Philippines, Suriname and Sweden. There are likely speakers scattered in other countries, who simply haven’t been counted by a census.

Why Did Indonesian Become A Language?

Part of the reason Indonesian is so localized is that it is an important part of the Indonesian national identity. It is one of the only countries that was able to make its indigenous language the national language following colonization.

There are estimated to be about 600 languages spread throughout the over 17,000 islands of Indonesia (if that number sounds high, it may get even higher as Indonesia is currently trying to complete a census of exactly how many islands it has). In an attempt to unite the country, Indonesia decided to standardize Malay and make it the language of law, politics, media and all other public forms of speech and writing. Under 20 percent of people are estimated to use Indonesian regularly at home, but it’s taught widely in schools and is spoken by most people to some degree.

In general, Indonesian is very similar to Malay’s Malaysian, Singaporean and Brunei standard varieties. There are differences in the lexicon and how certain words are pronounced due to Dutch and Javanese influences on Malaysian. They are usually mutually intelligible, but the differences can lead to some disconnect, which has led universities in Malaysia to create courses to teach students local vernacular. It’s possible to get by in other countries with only knowledge of Indonesian, but certain words will cause confusion.

Knowing how many people speak Indonesian can inspire you to learn the language once you realize how man potential conversational partners you have waiting for you. But there are plenty of other reasons, too!

Besides a few cultural influences due to colonialism and globalization, Indonesian is unrelated to any of the languages in the Indo-European language family tree. Learning languages like Spanish and German are popular choices for second languages because they originate from the same root language, but this can also be limiting. Indonesian provides a strong introduction to the Austronesian language family, and starting with it can help you easily learn Malay and other local languages. Indonesia is home to popular tourist sites like Bali.

On a technical level, though Indonesian is very different from English, it may actually be one of the easiest languages for English-speakers to learn because of its simple grammar rules and use of the Latin alphabet. Indonesian is unique in that it has kept Indonesia’s indigenous history alive through language, and by learning it you can learn about the rich culture of the region.

This article was first published on September 6, 2017. It has been updated to reflect newer data.

The post How Many People Speak Indonesian, And Where Is It Spoken? appeared first on Babbel.